Adolescents' Perceptions of Peer and Parent Responses to Adolescent Sexuality 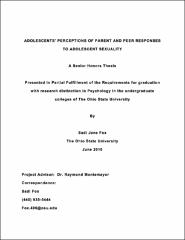