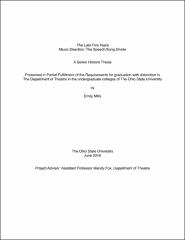 As a student of both theatre and music I am interested in the intersection of these two art forms. More specifically, I am interested in the stereotypes and often negative images which musical theatre carries; it has the stigma of being overacted, forced, and ridiculous. The main criticism is usually an unreasonable spontaneity of song. Musical theatre’s negative image is usually concentrated in the transition between dialogue and music. For my Honors Distinction Project I will explore the borders and relationship of music and theatre along with all the stereotypes and connotations of musical theatre. I will concentrate on contemporary productions in order to confirm that the issues addressed are relative to the genre as it exists today and not simply questions of historical or theatrical conventions. Next, I will produce The Last Five Years in the New Works Lab at Drake Performance and Event Center from June 3-6, 2010. I will oversee the production, acting as Musical Director. My duties during this production would include helping cast the show, serving as rehearsal pianist, teaching parts to the actors, and organizing and conducting the orchestra during performances. This position will provide me with the perfect view to observe the process and results of the production as applies to my research. Furthermore, since I am pursuing a career in Musical Direction, this will be the perfect opportunity for direct experience with the work. While I have not done any extensive research as of yet, I do have a few questions and hypotheses I would like to explore. One hypothesis I have considered is that a rough transition between speech and song could be related to different or divided rehearsal habits between a director and a musical director. Also, I have considered that seemingly forced transitions between dialogue and song may be a result of the physical separation of the actors from the musicians. Could intermixed placement or even intermixed performance responsibilities of actors and musicians contribute to increased continuity and feasibility of musical theatre? After exploring these questions through my research, I will then test my hypotheses about contemporary musical theatre performances by directly applying them to the production. I will then be able to judge the efficacy of my ideas. I anticipate that my research and exploration of the hypotheses mentioned above will prove that the production of contemporary musical theatre benefits from incorporated rehearsal processes mixing music and speech, as well as an experimentation with the physical placement of all artists. Additionally, I expect to find that modern negative stereotypes of musical theatre stem from iconic yet dated traditional examples of book musicals rather than contemporary practices. I will research the relationship between theatre and music then test my hypotheses through direct application to a production which I will serve as musical director.

Approved project for graduation with distinction.