Running to Lose: The Muslim Brotherhood and Parliamentary Elections 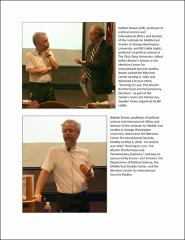 Nathan Brown is professor of political science and international affairs and director of the Institute for Middle East Studies at George Washington University. His area of expertise includes comparative politics of the Middle East, democratization and constitutionalism, rule of law in the Arab world, and Islam and politics. Brown is author of Peasant Politics in Modern Egypt (Yale University Press, 1990), The Rule of Law in the Arab World (Cambridge University Press, 1997), Constitutions in a Nonconstitutional World: Arab Basic Laws and the Prospects for Accountable Government (SUNY Press, 2002), in addition to several articles and edited collections on Arab politics and society, constitutionalism, and democracy. His most recent book, Palestinian Politics After the Oslo Accords: Resuming Arab Palestine, was published by the University of California Press in 2003. He is currently completing a book on Islamist political movements in the Arab world. Brown serves as a nonresident senior associate at the Carnegie Endowment for International Peace; he was named a Carnegie Scholar for 2009-2011. Brown received his M.A. and Ph.D. in politics and near Eastern Studies from Princeton University. He received his B.A. with honors from the University of Chicago.