Hybrid Warfare: The Struggle of Military Forces to Adapt to Complex Opponents 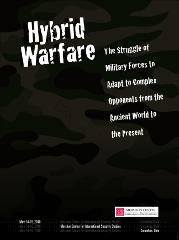 Hybrid warfare, a combination of conventional and irregular forces fighting against a common foe, has been an integral part of the historical landscape since the ancient world, but these conflicts have only recently been categorized as a unique type of conflict. Informed defense analysts believe that hybrid wars are the most likely conflicts in the 21st century. An historical examination of hybrid wars will help to illuminate the various aspects of these conflicts, how great powers have dealt with them, and potential prospects for the future of these types of wars. The United States is currently engaged in extended counterinsurgency conflicts in Iraq and Afghanistan and has significant military and other national assets assisting other states and regions against insurgencies. Rather than historical anomalies, Iraq and Afghanistan are harbingers of the wars to come in the next several decades. Nation state competitors are unlikely to challenge the United States in the realm of high-technology, conventional warfare. Rather, they will likely use a combination of conventional and insurgent/guerrilla forces – hybrid forces – to wear down American military capabilities in extended campaigns of exhaustion. The United States and its allies must study and understand the strategic, operational, tactical, and doctrinal parameters of hybrid conflicts and prepare to apply lessons from them. This project, which will illuminate historical examples of hybrid warfare from Ancient Greece to the modern world, is a step along that journey of understanding.