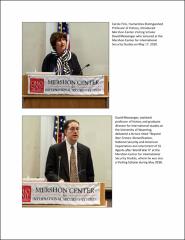 David Messenger is assistant professor of history and graduate director for international studies at the University of Wyoming. He is currently a visiting scholar at the Mershon Center for International Security Studies. During his time at Mershon, he will be preparing a study of Nazi party agents repatriated from Spain and Portugal to Germany in 1946 and 1947 following American and British investigations into their wartime and postwar activities. Messenger's research focuses on the transition from war to peace in Europe following the Second World War. He is particularly interested in how the international system, domestic politics, and societies at large dealt with issues of justice and democratization following the experience of Nazi atrocities and the collaboration of many non-Germans in these crimes over the course of the war. Messenger has focused his work on examining the Spanish dictatorship of Gen. Francisco Franco as one place, on the periphery of the war, where themes of collaboration, justice, and continuity raise some interesting questions. His first book, L’Espagne Républicaine: French Policy and Spanish Republicanism in Liberated France was published in 2008 by Sussex Academic Press. He has held fellowships from the Government of Spain and the Center for Advanced Holocaust Studies at the United States Holocaust Memorial Museum in Washington, D.C.