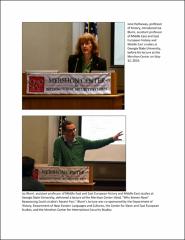 Isa Blumi is assistant professor of Middle East and East European history and Middle East studies at Georgia State University. His primary fields of research and publication are modern Balkan history including Kosova, Albania and identity politics; Islam in Europe and Southeast Asia; modern imperialism in the Ottoman, Italian, French and Austro-Hungarian Empires; the Middle East from 1800; and migration, comparative state systems and the dynamics of state/society interactions. Blumi is the author of Political Islam Among the Albanians: Are the Taliban Coming to the Balkans? (Kosovar Institute for Policy Research and Development, 2005), now in its second edition, and Rethinking the Late Ottoman Empire: A Comparative Social and Political History of Albania and Yemen, 1878-1918 (ISIS Press, 2003). He is also the author, editor, or co-editor of a number of edited volumes, chapters and journal articles. He is currently working on Chaos in Yemen: Societal Collapse and the New Authoritarianism (forthcoming from Routledge), which address current events in Yemen. Blumi’s research has been supported by the Woodrow Wilson International Center for Scholars, American Council of Learned Societies, American Research Institute of Turkey, Fulbright-Hayes, the Social Science Research Council, American Institute of Yemeni Studies, and Foreign Languages and Area Studies (FLAS) Fellowship. Before joining the faculty at Georgia State University, Blumi taught at Central European University in Tirana, Albania, Prishtina University in Kosovo, New York University, Yeshiva University, New School University, Trinity College, and American University of Sharjah in the United Arab Emirates. He received his Ph.D. in the joint program in History and Middle Eastern and Islamic Studies at New York University.