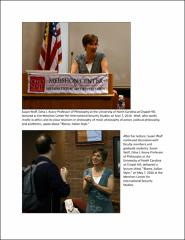 Susan Wolf is Edna J. Koury Professor of Philosophy at the University of North Carolina at Chapel Hill. She works chiefly in ethics and its close relations in philosophy of mind, philosophy of action, political philosophy, and aesthetics. Her research and teaching interests range widely over moral psychology, value theory, and normative ethics. Wolf is the author of Freedom Within Reason (Oxford University Press, 1990), and most recently Meaning in Life and Why It Matters (Princeton University Press, 2010). She is currently editing an anthology of essays titled Understanding Love Through Philosophy, Film, and Fiction. In addition to publishing numerous chapters in edited volumes, she has been published widely in journals including Philosophical Perspectives, Proceedings of the Aristotelian Society, Social Philosophy & Policy, and Ratio. Before moving to Chapel Hill, Wolf taught at Harvard University, the University of Maryland, and Johns Hopkins University. She is a member of the American Association of Arts and Sciences and the American Philosophical Society, and she is President of the Eastern Division of the American Philosophical Association for 2010-11. Wolf received her M.A. and Ph.D. in Philosophy from Princeton University. She received her B.A. from Yale University where she graduated Summa Cum Laude, Phi Beta Kappa, and received special distinction in philosophy.