Extreme Vulnerability of Migrants: The Cases of the United States and Mexico 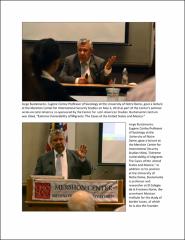 Jorge Bustamante is Eugene Conley Professor of Sociology at the University of Notre Dame and professor and researcher at El Colegio de la Frontera Norte, the prominent Mexican institute for the study of border issues, of which he is also the founder. Bustamante also serves as UN Special Rapporteur on Human Rights of Migrants. His research and teaching interests focus on U.S.-Mexico border studies, international migrations and human rights, and U.S. population of Mexican origin in the United States. He is a leading participant in international scholarly networks dealing with these themes and has played a major role in building and sustaining scholarly linkages between Mexico and the United States. Bustamante has been quoted as a leading expert in the field of international migrations by most major newspapers in the United States and his commentary has been featured on programs such as Night Line, 60 Minutes, and the McNeil-Lehrer News Hour. He has published over 200 articles on Mexican immigration to the United States, US-Mexico border phenomena and US-Mexico relations in scholarly journals from the United States, France, Germany, Italy, Japan, Venezuela, Spain and Mexico. Bustamante has received numerous honors including the prestigious National Science Award, which was given to him by former President of Mexico Miguel de la Madrid, and the National Award on Demography, which was given to him for his research on Mexican migration to the United States by former President of Mexico Carlos Salinas de Gotari. In 2005, the Mexican Congress named Bustamante as their nominee for the Nobel Peace Prize, and he was named Honorary Consul General of Japan that same year. In 2007, he received the DuBois-Johnson-Frazier Award by the American Sociological Association. Bustamante was appointed by the U.S., Canadian and Mexican governments to the Joint Public Advisory Committee (J-PAC) and the Border Environmental Cooperation Commission (BECC) after the signing of the North American Free Trade Agreement. After Mexico joined the Organization for Economic Co-Operation and Development, he was appointed as the Continuous Reporting System on Migration's correspondent for Mexico. Bustamante received his M.A. and Ph.D. from the University of Notre Dame. He also holds a law degree from the National Autonomous University of Mexico.