The U.S. and the 'United States of Europe': A Comparision of the Cold War and the Post-Cold War Years 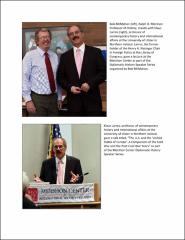 Klaus Larres is professor of contemporary history and international affairs at the University of Ulster in Northern Ireland. Larres, the former holder of the Henry A. Kissinger Chair in Foreign Policy at the Library of Congress, is a senior research fellow at the Library of Congress and at Johns Hopkins University's School of Advanced International Studies (SAIS) in Washington D.C. He is also senior fellow of the International Institute of Strategic Studies (IISS) in London. Larres's research focuses on American, British, and German foreign policy issues in past and present; on the history and politics of European integration; and on the impact of American hegemony in the contemporary world. He also focuses on international geopolitics and western policy towards Central Asia and the Middle East (specifically the Gulf states). Larres has published widely on international affairs during the Cold War and post-Cold War years, including Churchill’s Cold War (Yale UP, 2002) and The Politics of Personal Diplomacy (Yale UP, 2002). He is currently working on a book entitled United States and the Unity of Europe from Bush senior to Obama. His latest publication is the edited book Blackwell Companion to Europe Since 1945 (Blackwell, 2009), an extensive reference work for advanced students and scholars. His book The US Secretaries of State and Transatlantic Relations since 1945 will be published in fall of 2009 (Routledge/Taylor and Francis). Larres has been selected for fellowships and visiting professorships at the Library of Congress, Oxford University, University of Notre Dame, University of Innsbruck, University of Jyväskylä in Finland, George Washington University, Washington, DC, and the American Institute of Contemporary German Studies (AICGS) at Johns Hopkins University. He is a fellow of the Royal Historical Society, the International Institute of Strategic Studies (IISS), and the American Academy of Political Science, as well as an elected a member of the Cosmos Club in Washington, DC. He has received research awards and grants from numerous foundations and institutions including the Kissinger Chair program at the Library of Congress, the Rockefeller Archive Center, the British Arts and Humanities Research Board, the British Academy, the Commission of the European Communities, the British Foreign and Commonwealth Office, the Lyndon B. Johnson Foundation and the George H.W. Bush Foundation. Larres was educated at the University of Cologne in Germany and the London School of Economics (LSE)