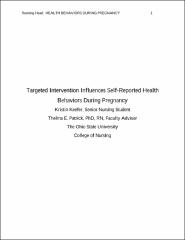 Objective: The purpose of this study was to describe self-reported health-promoting lifestyles in women at three time points in pregnancy and to test for differences between control and intervention groups enrolled in a walking intervention. Background: During pregnancy a woman is perceived to be most active in her health care and more open to health behavior change. Improved nutrition, activity, rest, and reduced alcohol and smoking consumption are reported. Research to identify specific health behaviors in the context of a health-promoting intervention is limited. Subjects: One hundred twenty-three pregnant women with a history of preeclampsia enrolled in an intervention to reduce recurrent preeclampsia. Women were randomized to an intervention group (n=62) or an attention control group (n=61). Methods: Data were drawn from the longitudinal study, Exercise Intervention to Reduce Recurrent Preeclampsia (R01 NR05275).All participants completed the Health-Promoting Lifestyle Profile II, (HPLPII), a 52-item questionnaire at Baseline (T1)(18 weeks gestation), time 2 (T2)(28 weeks), and time 3 (T3)(34 weeks). Total HPLPII subscale scores were described across the time points, and group differences were tested by repeated measures ANOVA. Results: Women who participated in the study were 29.5 years of age, while 87.5% of women were Caucasian, and 12.5% of women were African-American. For all participants, the HPLPII total score (mean±SD) was significantly increased over time, specifically T1 2.78±.41, T2 2.91±.43 and T3 2.93±.46 (F = 20.92, p = .000). The mean subscale scores, when significantly different, were higher at T3 as compared to T1 and T2 except physical activity, which was highest at T2. While observing for group differences, total HPLPII score (F = 7.06, p =.010), health responsibility (F = 5.79, p = .019), physical activity (F = 25.55, p = .000), and stress management (F = 11.13, p = .001) were all significantly different between the walker and control groups. Women in the walking intervention scored significantly higher than women in the control group in all four categories. The remaining scores for the subscales of nutrition, spiritual growth, and interpersonal relations showed no significant differences between the two groups. Conclusions: Both a behavior-specific and attention-control intervention positively influenced self-report of health-promoting lifestyles during pregnancy. The overall health promotion score and all significant subscale scores with the exception of physical activity were highest during the third trimester. Such a finding suggests women may be more willing to practice health promotion behaviors during the third and final trimester when their pregnancy becomes most real. For those receiving the intervention targeted at increasing physical activity, the subscale score for physical activity was increased over time, but more so from the first to the second trimester. Women enrolled in a walking program were part of a targeted-behavioral intervention which focused on physical activity. These women reported significantly higher total HPLPII scores, and they reported significantly more good health behaviors in the areas of health responsibility, physical activity, and stress management than those women in the control group. Such findings suggest improving one behavior through a targeted intervention, such as a walking program, can improve overall health promotion, even in areas of health promotion outside the realm of the targeted-intervention.