The Islamic Dimension of the Insurgencies in Afghanistan and Pakistan 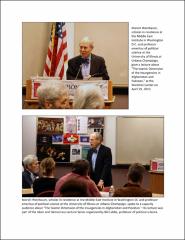 Marvin Weinbaum is a scholar-in-residence at the Middle East Institute in Washington DC. He is professor emeritus of political science at the University of Illinois at Urbana-Champaign, where he served as the director of the Program in South Asian and Middle Eastern Studies, and he has served as analyst for Pakistan and Afghanistan in the U.S. Department of State’s Bureau of Intelligence and Research. Weinbaum's research, teaching, and consultancies have focused on the issues of national security, state building, democratization, and political economy. He is the author or editor of six books, including South Asia Approaches the Millennium: Reexamining National Security, co-edited with Chetan Kumar (Westview Press, 1995) and Afghanistan and Pakistan: Resistance and Reconstruction (Westview Press, 1994). Weinbaum has written upwards of 100 journal articles and book chapters, mostly about Pakistan, Afghanistan, and Iran, but also on Egypt and Turkey. Among his recent publications are book chapters for edited volumes dealing with the U.S.-Pakistan partnership in counterterrorism, Pakistan’s political culture, and state building and the security challenges in Afghanistan. Weinbaum has been awarded Fulbright Research Fellowships for Egypt and Afghanistan, and he has held a senior fellowship at the United States Institute of Peace. He has also received research awards from the Social Science Research Council, the Ford Foundation, the Hewlett Foundation, IREX, the American Political Science Association. Weinbaum has held adjunct professorships at Georgetown and George Washington universities. He lectures regularly at the U.S. Foreign Service Institute, and he received the State Department's Superior Honors Award. Since leaving the State Department, he has assumed numerous consultancies, both with government agencies and the private sector.