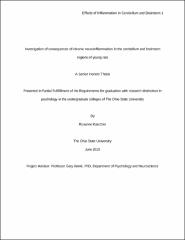 In neurodegenerative diseases like Alzheimer’s (AD) and Parkinson’s (PD), specific areas in the brain degenerate, producing disabling physical and mental symptoms. A major factor of the degeneration is brain inflammation. A recent theory suggests that certain regions in the brainstem could be vulnerable and become negatively affected first in neurodegenerative diseases; however this theory has yet to be extensively explored. I predicted that there would be an elevated amount of inflammation, measured by the number of activated microglia, in the cerebellum because of vulnerability and consequences of surgery. I also predicted regions in the brainstem such as the raphe nucleus (RN) and the locus coeruleus (LC) would be damaged based on previous observations in humans with neurodegenerative diseases. An animal model of neuroinflammation was used to reproduce the pathology of a neurodegenerative disease in order to examine the cerebellum and brainstem. These regions have not yet been studied in this model. An animal model of neuroinflammation is surgically created by diffusing consistent, low-levels of lipopolysaccharide (LPS) into the 4th ventricle of a rat. Histological processes and behavioral tests were conducted. The results show that rats exposed to LPS have more activated microglia in the cerebellum and brainstem than the controls. Rats exposed to LPS have motor impairment and perform more poorly on a hanging task than control rats. The condition of the RN and the LC was qualitatively deduced and the nuclei have fewer neurotransmitters and more activated microglia in the rats exposed to LPS. Inflammation could have negatively affected the condition of those nuclei. Abnormalities of the RN and LC have also been found in humans with AD or PD, thus indicating that the animal model of neuroinflammation I chose for study reproduces important pathological aspects of neurodegenerative diseases and would be useful for future investigations of potential drug treatments.