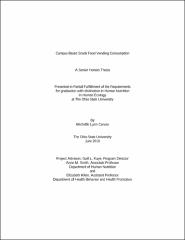 Changes in eating habits and behaviors are needed to reverse the obesity trend in the United States. The Ohio State University recently mandated (through contract specification) implementation of a healthy vending snack program using Snackwise®. Snackwise® is a software program developed by Nationwide Children’s Hospital that calculates nutrient density scores using 11 parameters from the nutrition facts label. Composite scores are used to group snack foods into easily understood categories: “green” items should be chosen most often, "yellow" chosen occasionally, and "red" chosen least often. As specified in the contract, the university requires that specific proportions of green, yellow and red items be provided in vending machines across campus; 28.5% green, 43% yellow, and 28.5% red. While the intent of this program is to favorably impact snack choices, no data exists that describes who uses vending machines, how frequently they do so, what they purchase and why. This study evaluated the purchases of vending machine clientele to create a snapshot of what drives consumers in their snacking purchases. The objective of the study was to determine who makes purchases at vending machines on campus, what their purchases are, what factors drive their purchase, and how often they purchase food at vending machines. The study was a cross-sectional survey of vending consumers at 8 pre-selected campus vending machines. Trained interviewers observed and interviewed 478 vending patrons during a four day study period. A convenience sample of building locations (n= 8) was drawn from a selection of the highest grossing vending machines on campus, stratified by two types of buildings: residential buildings and classroom buildings. Variables being measured included vending choice, reason for vending choice, and self-reported frequency of vending purchases. Select demographic variables were also collected. These included gender, age, and university affiliation. Students comprised the largest proportion of vending machine clientele at 85% of the surveyed participants. Consumers between the ages of 18-24 also made up a large portion of consumers at 77% of surveyed participants. For those patrons aged 18-24, the items purchased most often were red (58%) followed by yellow (30%) and green (9%). The two strongest factors driving their purchases were hunger (43%) and convenience (42%). Over half the surveyed population of consumers aged 18-24 make vending purchases at least 1 time per week (53%). The results of this study will be used to design interventions aimed at and promoting healthier snack food choices. Advisor: Dr. Gail L. Kaye