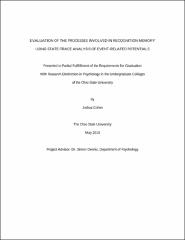 Episodic recognition memory experiments attempt to determine the processes that underlie recognition (Mandler, 1980). Currently, there is a debate whether episodic recognition memory involves separate components of familiarity and recollection (i.e., the Dual Process Model) or a single process which involves varying degrees of confidence based on familiarity (i.e., the Single Process Model). Recollection and familiarity differ in the type of information they provide and also the extent to which each influences confidence (Yonelinas, Dobbins, Szymanski, Dhaliwal, & King, 1996). Familiarity is specifically assumed to reflect the assessment of quantitative memory strength information. Recollection is believed to reflect a threshold retrieval process whereby qualitative information about a previous event is retrieved (Yonelinas, 2002). In this paper, the validity of the single and dual process models will be assessed by testing the assumptions of the models using electrophysiological data (ERPs) from a recognition experiment. Previous recognition tests have relied on the use of dissociation logic as evidence of separate processes. The dissociations which showed the strongest support for a dual process are based on the flawed logic that physical variables and psychological variables are linearly related, and differences between these variables can be attributed to different underlying processes. In order to evaluate the number of processes involved in recognition, this paper proposes the use of a non-parametric statistical approach that looks to determine the number of underlying processes that are needed to account for a given set of data without making prior assumptions of a single or dual process model. It is a general method based on the premise that two dependent variables will covary with each other to the extent that they are affected by the same independent variable (Bamber, 1979). The results of the state-trace analysis of the electrophysiological data provide support for a single process model of recognition.