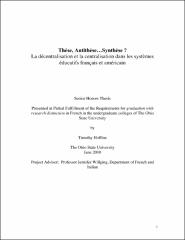 The French education system has traditionally been characterized by a high degree of centralized, national government control, whereas the U.S. education system has long been highly decentralized with little power reserved for the federal government. Since the development of mass education as an area of national importance in both countries, changes have been undertaken to better accommodate a growing number of students, and the variety of circumstances schools face in educating them. These changes have challenged notions in both countries about the importance (and ability) of maintaining their traditional structures of control over education—structures that in part emanate from their historical backgrounds and political ideologies. This research will examine whether France, whose highly centralized education system has undertaken some decentralizing reforms, is converging with the education system of the United States, whose highly decentralized system has undertaken centralizing some reforms. By conducting a review of academic literature in books, peer-reviewed journal articles, think tank analyses, and journalistic articles, I have found that while convergence is occurring in some policy areas (such as curriculum content standards) of education governance, other policy areas (such as school choice) are diverging in terms of the French and American approach to where power over education should exist in each country. Moreover, I hope my research will inform discussion about the potentially changing nature of traditional governmental and administrative characteristics of both the United States and France. This question has taken an increasingly important public role in the context of policy debates in other fields, such as healthcare, and also in the context of education policy, where national standards and No Child Left Behind are currently being debated in the U.S.