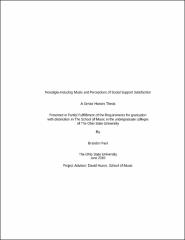 Recent empirical studies suggest that nostalgic emotions strengthen and extend a person’s awareness of their own social bonds with friends, family, and loved ones. Often a reported emotion while listening to autobiographically-salient songs, nostalgia evoked by music may be able to demonstrate a similar social utility. First, a review of relevant empirical literature on nostalgia is given. Discussion covers how the definition of nostalgia changes from that of a disease to a psychological construct. In the late 20th Century, empirical studies first take place by marketing researchers and then by social psychologists. More recently, nostalgia and music have become of interest to researchers. Second, a survey and experiment were conducted to test the hypothesis that nostalgia-inducing music can increase perceptions of social support. A survey was conducted where participants identified songs that made them feel nostalgic. In addition, the ages of the participants were collected. From the information provided by the survey, the age of the participants at the date of release for the song was determined to be on average between 15 and 18 years. In a subsequent experiment, song stimuli were selected from this age range for participants 19-30 years of age. This experiment exposed a target group to nostalgia-inducing songs and then measured satisfaction with their present social support. A control group listened to songs that were not identified as nostalgic. Results indicate that participants who heard nostalgia-inducing autobiographical songs did not report higher satisfaction with social bonds than the control group. Last, implications of the study and its results are discussed at length.