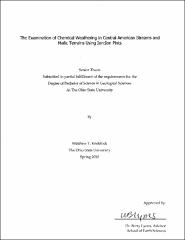 Chemical weathering is an important process in the development of soils, sediments, and water chemistry from rock. The rate of weathering is significantly increased in the presence of atmospheric gases, water, and heat in tropical locations such as Panama and Nicaragua. There is very little understood about these tropical climates and their intense erosive weathering. Furthermore these locations are mostly dominated by mafic and intermediate igneous compositions which are highly resistant to weathering. Concentrations of major ions, Magnesium (Mg2+), Calcium (Ca2+) Sodium (Na+), and Chlorine (Cl-), have been measured in numerous rivers, tributaries, and watersheds of these tropical locations over the past 4 years. The purpose of this study is to further analyze the factors and relationships between resultant water chemistry and chemical weathering of regional mafic lithologies in order to better understand how climate, rock type, and topography affect the rate and intensity of tropical weathering. Using ion:ion ratio plots of Mg/Na – Ca/Na from measured water chemistry can help determine which lithologies are being weathered quicker and how it influences sediments and soils further downstream.