A Historic Deal: The Cleveland Browns' and their Compromise Solution to Professional Sports Franchise Relocation 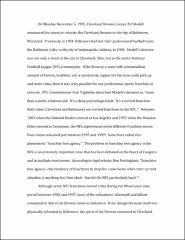 Although seven NFL franchises moved cities during the fifteen-year time period between 1982 and 1997, none of the relocations' aftermath and fallout compared to that of the Browns move to Baltimore. Even though the team itself was physically relocated to Baltimore, the spirit of the Browns remained in Cleveland. The city obtained the rights to the name, colors, logo, tradition, and history of the Cleveland Browns through a historic deal. This particular franchise relocation changed the landscape of franchise free agency and established an important precedent. The Cleveland Browns' move to Baltimore was a unique exception to the norm in franchise relocation and it created a new model that has already been followed and should continue to be followed in the future.