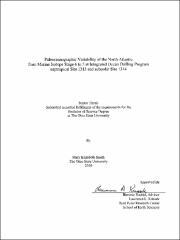 The North Atlantic Ocean plays a crucial role in shaping the terrestrial climates of the Northern Hemisphere. The penultimate deglaciation (140 to 130 ka B.P.) is considered as one of the most rapid oceanographic changes of the Quaternary period. Past changes in ocean circulation are mainly obtained by analyzing deep sea sediments using various proxies. In this study, we reconstruct the variability in the upper water masses of the North Atlantic by analyzing Integrated Ocean Drilling Program (IODP) sediment cores retrieved from a subpolar (1314) and subtropical (1313) location from Marine Isotope Stage (MIS) 6 to 5 (180-120 ka B.P.). Planktonic foraminifera are well-linked to climatic and environmental conditions in this area and serve as a paleo-proxy for oceanographic variability. Variability in sea-surface conditions and associated water masses are reflected by changes in fossil planktonic foraminiferal relative abundances. The δ18O of planktonic foraminifera is used to indicate relative warmer and cooler sea-surface conditions. Iceberg input is inferred by the presence of ice-rafted debris. The variability of the North Atlantic Current and the Polar Front was assessed by tracking the migration of subtropical and subpolar waters. We find clear indications of freshwater inputs, including a Heinrich Event, which provide a mechanism to freshen the sea-surface and perturb conditions. The warmest sea-surface conditions appear in phase with interglacial MIS 5 and the coolest conditions appear in phase with glacial MIS 6. Our results indicate that the North Atlantic surface circulation responds to changing conditions associated with a transition from a glacial to interglacial period.