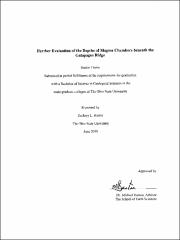 ABSTRACT The Galapagos Ridge System is an exceptionally unique spreading system. The Galapagos Spreading Center (GSC) is located at a divergent boundary that separates the Cocos and Nazca plates and spreads at an intermediate rate of 47 to 63 mm/yr (Canales et al., 2002). This research, which is a continuation of Emily England’s work (Senior Thesis, 2008), is based on speculation that the spreading rate of divergent systems influences not only the depths of partial crystallization of magma but also the structure of magma plumbing systems beneath spreading centers (Kelley and Barton, 2008). Using the data downloaded from the RIDGE database maintained by Lamont-Doherty Earth Observatory, this study attempted to constrain the depths at which magma partially crystallizes beneath the Galapagos Spreading Center (GSC). Many methods of calculating the pressures of partial crystallization exist, foremost among them being the method developed by Claude Herzberg (Journal of Petrology, 2004); however our method, substantiated by work done by Jameson Scott (Senior Thesis, 2009) on the Reykjanes Ridge in Iceland, is more accurate and reliable than similar methods. This method is based on findings that show that when a liquid is in chemical equilibrium with olivine, plagioclase, and augite (clinopyroxene) its pressure at that state is the pressure of crystallization of the magma. The liquid compositions of the magma were found by analyzing volcanic glasses, which were collected on scientific cruises along the Galapagos ridge. The data that were not in equilibrium with olivine, plagioclase, and augite were filtered out of the final analysis, which produced a final dataset of 718 analyses that ranged from 83.04o W to 99.56o W. This dataset was then subdivided into 9 localities based on longitude, in a similar fashion to England, E., (2008). Results show that at the GSC, magmas crystallize over a range of pressure from 0.037 to 9.05 kBar which corresponds to depths of about 0.13 to 31.84 km respectively. The average pressure of crystallization however is 2.88 ± 0.86 kBar at a pressure of 10.07 km. The widest range of pressures occurs at the western and eastern extents of the sample area. Furthermore, the data indicates a possible double magma chamber on the western end, while only a single chamber on the eastern side.