The Effects of Low versus High Cognitive Load on Judgments of Probability and Verdict: How Inducement of System 1 versus System 2 Processing Impacts the Wells Effect 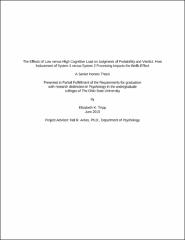 Humans have been shown to systematically ignore simple base-rate information. This tendency has been demonstrated in a variety of areas; one of the most well documented of these is the field of law. The Wells Effect, a phenomenon in which jurors display an inconsistency between their evaluations of probability and verdict, has perplexed researchers for the better part of two decades. Probability has to do with perceived likelihood of an event occurring, whereas verdict has to do with an actual evaluation of liability; most people concur about probability, whether given simple base rates or testimony from a human witness, but those in the latter group render affirmative verdicts far more often than those in the former. In this experiment, we tried to determine which system of processing, System 1 (immediate, "gut-reaction" mode of processing) or System 2 (measured, more calculated mode), presides over judgments of both probability and liability in a 2x2x2 (base rates versus human testimony, by 80% versus 40% probability, by high versus low cognitive load) between-subjects design. We examined this relationship based on participants’ judgments after they read a case summary that employed either base rates or testimony from an expert. The results indicate support for the notion that verdict is a result of System 2 processing, though further clarification through future studies is needed.