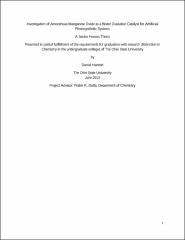 A presentation of this work was named a winner of the Meek Undergraduate Poster Session in 2009.