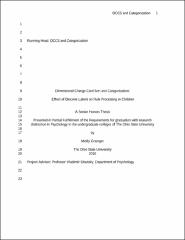 In the study of brain development, much research has focused on changes in executive function. According to the Cognitive Complexity and Control (CCC) Theory, the development of executive function can be understood through specific "age-related changes in the maximum complexity of rules children can produce and use when solving problems." In order to evaluate these age-related changes, Philip Zelazo used the Dimensional Change Card Sort Task, which asks children ages 3-5 to sort a deck of 10 cards into two target piles based on two given sets of rules. The children are given a rule for sorting the first 5 cards of the deck; then a new rule is introduced for sorting the last 5 cards. The task evaluates the child’s ability to utilize executive control, inhibiting the first rule in favor of the second rule. Typically, children ages 3-4 continue to sort by the first rule, even when this response is no longer appropriate, while 4-5 year olds successfully complete the task. In traditional understandings of this task, children were asked to use rules focusing on dimensions, such as color, shape, and number. However, our manipulation of the DCCS will use rules formed on the basis of discrete categories, specifically asking children to separate between cat versus dog and toy versus pet. Through this manipulation of Zelazo’s original study, we hope to investigate the CCC theory’s reliance on dimensions to describe levels of complexity in executive function development.