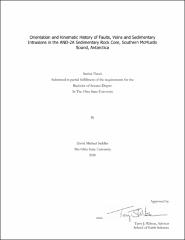 The Southern McMurdo Sound (SMS) project recovered 1138 m of mainly Neogene rock core from the Victoria Land Basin of Antarctica, which is located in the westernmost branch of the Ross Sea rift system. Approximately 1008 natural fractures occur in the core including faults, veins, brecciated zones and sedimentary intrusions. This study contributed to the process of orientation of the core, and structures within it, to in situ coordinates by completing digital ‘stitching’ of core into intact core intervals. The attitudes of oriented structures were plotted on graphical stereonets to identify any consistently oriented sets of faults, veins and sedimentary intrusions. Twenty-one core intervals were analyzed and preliminary results indicate the orientation of the fault sets changes with depth from a dominant northwest trend downward to a dominantly northeast orientation. Change in fault orientation occurs at a regional marker reflector at 922.38mbsf, dated to ~19Ma. The northeast fault orientation observed in the older sedimentary rocks of the SMS core has also been observed in the Cape Roberts core to the north and for mapped, onshore faults. This provides evidence for transtensional rifting along the Transantarctic Mountain Front rift boundary in the Oligocene and Early Miocene.