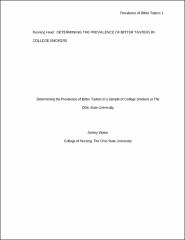 Determining the Prevalence of Bitter Tasters in a Sample of College Smokers Ashley Weber Advisor: Dr. Karen Ahijevych Social smoking is a growing trend among college students, characterized by occasional smoking, lack of nicotine dependence, and less intention to quit. College students may not self-identify as smokers because of these characteristics. Bitter taste phenotype (BTP), one’s ability to test bitter, may help tailor appropriate oral nicotine replacement therapy (NRT). Research questions examined differences in BTP and nicotine dependence among regular and social smokers. A bitter taste test determined ability to taste bitter. Carbon monoxide (CO) breath levels using the Bedfont Mini-Smokerlyzer and salivary cotinine were used as biomarkers of smoking. A final sample of 22 (68.2% male; 91% Caucasian) was used. Questionnaires showed mean age 19.3 ±1.4 years, with an average of 1.7 ±0.9 years at The Ohio State University. Smoking status results revealed a mean of 2.3 ±1.4 smoking years, with average age of 16.1 ±1.8 years when initiating smoking. A mean of 3.3 ±2.9 cigarettes was smoked per weekday, and 15.5 ±9.8 cigarettes per entire weekend. Fourteen (63.6%) subjects considered themselves "social smokers." Prevalence of bitter tasters was 59.1%, with 45.5% being categorized as medium tasters (coded as "1"), 13.6% as supertasters (coded as "2"), and 40.9% as nontasters (coded as “0”). BTP was significantly and inversely correlated with smoking status for measures such as average number of cigarettes on a weekday (Kendall’s tau b = -.402), and percentage that you smoke with others (Kendall’s tau b = -.434). No significant findings resulted in comparison of Fagerström Test for Nicotine Dependence (FTND) score based on BTP. However, the trend of nontasters having a higher FTND score than bitter tasters was observed. As there is limited research about smoking habits of college students and the best means to help them quit, understanding students’ social smoking, oral NRT use, and BTP will aid in determining the most effective cessation products and programs.