Investigation into the Intestinal Microflora of Children with Autism Spectrum Disorder 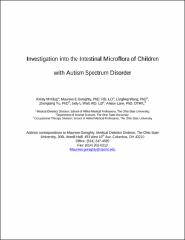 Objectives: Autism Spectrum Disorders (ASD) continue to be diagnosed at a rapidly progressing rate now estimated to be 1 in 91 children in the United States. Autism is a pervasive developmental disorder characterized by a range of atypical behaviors that include difficulties with social reciprocity, impaired language development, resistance to change, and repetitive behaviors. About 40-70% of children diagnosed with ASD suffer from gastrointestinal distress, impairing proper nutrient consumption, which has been associated with abnormalities in their intestinal microflora. The primary objective of the study was to quantify and compare both beneficial (Bifidobacteria, Lactobacilli) and pathogenic (Clostridia) bacteria in children aged 3-9 with ASDs as compared to neurotypical controls. Methods: Participants were selected based on the eligibility criteria prohibiting antibiotics or probiotics. Molecular characterization of the stool samples included real-time polymerase chain reactions (PCR) assays for total Bifidobacterium, Lactobacillus, and Clostridium (C. clusters I, XIV, and C. bolteae). Results: Unpaired t-tests of the molecular characterization of ASD stool samples revealed significantly lower amounts of Lactobacilli (p = 0.0059) and higher amounts of C.bolteae (p = 0.0079) than that of their typical peers. No significant differences were found in the levels of Bifidobacterium (p=0.2066), C. cluster I (p = 0.9391), and C. cluster XIV (p = 0.187) between the two groups. Conclusions: Results suggest that children with autism may have significantly lower amounts of beneficial (Lactobacilli) bacteria and higher amounts of pathogenic bacteria (C. Bolteae). Further study is warranted to determine whether interventions such as prebiotic or probiotic supplementation would be advantageous in improving intestinal microflora. Advisor: Maureen Geraghty