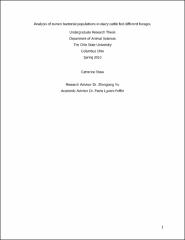 Forage is an important component of diets for ruminant animals. Rumen bacteria are responsible for degrading fiber in forages. In addition, microbial proteins make up the major portion of the proteins that the animal digests and absorbs in the small intestines. Different species of bacteria are better suited to increase efficiency of rumen degradation than others. Also, methane production by methanogens in the rumen results in a 6 to 10% loss of energy in feed; this is an increasingly pressing issue for both the health of the environment and the efficiency of the producer. Changes in types and amounts of forages in the diet can alter the populations of the various bacterial species in the rumen, the rumen fermentation, as well as populations of methanogens. The objective of this study was to determine whether changes in the types and amount of forage change the populations of methanogens and fibrolytic bacteria species. In the present study, five rumen-cannulated Holstein cows were each fed five diets with different forage sources over a period of fifteen weeks in a Latin Square design, with each diet being fed for three weeks to each cow. The five diets were: corn silage as a control diet, the control diet plus 5.1% wheat straw, 10.1% wheat straw, 5.5 % corn stover, or 11.5% alfalfa hay. The rumen samples collected were filtered through three layers of cheesecloth to separate the liquid and solid fractions, and microbial DNA was extracted from each fraction of each sample. Specific quantitative real-time PCR was used to analyze the populations of three common rumen cellulolytic bacterial species: Ruminococcus albus, Fibrobacter succinogenes, and Ruminococcus flavefaciens. In addition, three novel species from the genera Acetivibrio, Acidaminobacter, and Lachnospira, which were identified from fractionated rumen samples in a previous study, were assessed as well. Populations of total bacteria, the genus Butyrivibrio, and methanogens (archaea) were also analyzed. DGGE of total bacteria and archaea was performed to assess the dietary effects on the overall bacterial and archaeal communities. No differences were observed between the five diets, indicating that the differences between the forages offered was not sufficient to alter the bacterial and archaeal populations.

The Will C. Hauk Endowment Fund