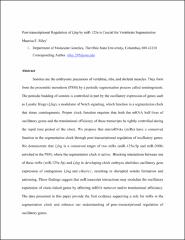 Somites are the embryonic precursors of vertebrae, ribs, and skeletal muscles. They form from the presomitic mesoderm (PSM) by a periodic segmentation process called somitogenesis. The periodic budding of somites is controlled in part by the oscillatory expression of genes such as Lunatic fringe (Lfng), a modulator of Notch signaling, which function in a segmentation clock that times somitogenesis. Proper clock function requires that both the mRNA half-lives of oscillatory genes and the translational efficiency of these transcripts be tightly controlled during the rapid time period of the clock. We propose that microRNAs (miRs) have a conserved function in the segmentation clock through post-transcriptional regulation of oscillatory genes. We demonstrate that Lfng is a conserved target of two miRs (miR-125a-5p and miR-200b) enriched in the PSM, where the segmentation clock is active. Blocking interactions between one of these miRs (miR-125a-5p) and Lfng in developing chick embryos abolishes oscillatory gene expression of endogenous Lfng and cHairy1, resulting in disrupted somite formation and patterning. These findings suggest that miR:transcript interactions may modulate the oscillatory expression of clock-linked genes by affecting mRNA turnover and/or translational efficiency. The data presented in this paper provide the first evidence supporting a role for miRs in the segmentation clock and enhance our understanding of post-transcriptional regulation of oscillatory genes.