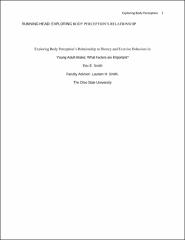 This study aims to explore the interrelationships between body perception, sexual identity, depression, dietary behaviors and exercise behaviors in young adult men. While most research on body perception has focused on eating disorders in adolescent girls, socio-cultural norms for masculinity cause anxiety in young men. Consequently, the desire for muscularity may lead young men to participate in risky dietary and exercise behaviors. This study includes 2253 males aged 18-28 from the Wave III core in-home sample of the Longitudinal Study of Adolescent Health (Add Health), a nationally representative sample. For this secondary analysis, Wave III cross-sectional weights were applied. Using a socio-ecological perspective, intra-personal factors were: age, health, sexual identity formation, body perception, current eating behaviors, current exercise behaviors, and depression. School enrollment was an interpersonal factor and ethnicity was examined as an extra-personal variable. Descriptive statistics, Pearson correlations, and independent t-tests were conducted with p <.05 as significant. Mean age = 21.9 (SD=1.87). Most men were Caucasian (66.4%); 17.3% were Black, and 9.3% Native American. Nearly 5% reported having been attracted to a male but only 2.1% reported being either bisexual or gay. One quarter of the men were currently attending school. Most (96.1%) considered their health from good to excellent. Only 52% considered their self-perception of weight “about right”. Half of the men reported making efforts to change their weight. Engagement in risky dietary and exercise behaviors was reported. Nearly 5% reported depressive symptoms. Most body perception research has focused only on young women. Understanding the factors that contribute to body image perception in young men is needed to impact adverse health outcomes that result from risky dietary and exercise behaviors.