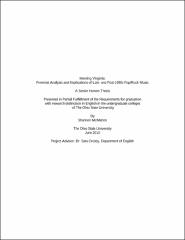 Third wave feminists' interactions with pop culture in the 1990s manifested largely in the world of music through the loud, angry Riot Grrrls and the tempered, welcoming Lilith Fair. Mass media outlets and feminists alike pinpointed the era after Lilith Fair ended in 1999 as a new low point for feminist discussion: over-commercialized, over-exposed teen pop stars of the era had become popular, and their lyrics did not initiate constructive discussions about personality quirks, identity, or gender issues like the feminist artists of the early 1990s. However, bands like Train, the male and mainstream band whose lyrics lofted through the pop/rock radio airwaves of the late 1990s and early 2000s, often fall outside the scope of the feminist and media critics. By showcasing an extensive interdisciplinary analysis of relevant history, lyrics, literature, and culture, my project shows how male artists of this era like Train, with their song "Meet Virginia," were fundamental assets to the feminist Third Wave. My project tracks the growth of feminism through the 1990s and elucidates the influence of Riot Grrrls and Lilith Fair on third wave feminist music. Ultimately, I show that the constructions of female individuality present in the male pop-rock music of the late- and post-1990s era are important for both connecting with female listeners on an individual level as well as drawing attention to larger, contemporary social issues of feminist unrest.