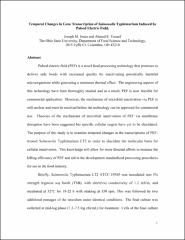 Pulsed electric field (PEF) is a novel food processing technology that promises to deliver safe foods with increased quality by inactivating potentially harmful microorganisms while generating a minimum thermal effect. The engineering aspects of this technology have been thoroughly studied and as a result, PEF is now feasible for commercial application. However, the mechanism of microbial inactivation via PEF is still unclear and must be resolved before the technology can be approved for commercial use. Theories of the mechanism of microbial inactivation of PEF via membrane disruption have been suggested but specific cellular targets have yet to be elucidated. The purpose of this study is to examine temporal changes in the transcriptome of PEF treated Salmonella Typhimurium LT2 in order to elucidate the molecular basis for cellular inactivation. This knowledge will allow for more directed efforts to increase the killing efficiency of PEF and aid in the development standardized processing procedures for use in the food industry. Briefly, Salmonella Typhimurium LT2 ATCC 19585 was inoculated into 5% strength tryptose soy broth (TSB), with electrical conductivity of 1.2 mS/m, and incubated at 32°C for 18-22 h with shaking at 150 rpm. This was followed by two additional passages of the inoculum under identical conditions. The final culture was collected at mid-log phase (7.3–7.5 log cfu/mL) for treatment. Cells of the final culture were treated with a PEF processor (OSU-4ERRC) using a predetermined treatment that produced a 1-log cfu/mL reduction in cell population as determined by the plate count method on tryptose soy agar (TSA). The treatment conditions were: square wave, bipolar pulse, 25.6 kV/cm electric field, 3 μs pulse width, 1 ms delay time, and 3 mL/s flow rate, giving a total treatment time of 91 μs. The temperature of the treated culture was maintained at 30-32°C with cooling before the first chamber, after the second chamber, and after the fourth chamber, via cooling coils submerged in a circulating water bath. RNA of treated cells was extracted at 0 (control), 3, 30, and 60 min post treatment and used to produce labeled complementary DNA (cDNA) via Reverse Transcriptase PCR (RT-PCR). cDNA from opposing samples was labeled for comparison with either or Cy3 and Cy5 and opposing samples were competitively hybridized to a Salmonella microarray slide (Pathogen Functional Genomic Research Center Salmonella Typhimurium, Version 5) containing four replicates of each Salmonella open reading frame. The slides were manually washed and scanned at 10 μm spot resolution. Image and data analysis were performed using the TIGR TM4 software suite; specifically, Spotfinder v. 3.2.1 for image analysis, MIDAS v. 2.21 for data normalization, and Multiple Experiment Viewer (MeV) v 4.5.1 for statistical analysis and gene clustering. Data processing included spots identification using the Otsu algorithm, LOWESS normalization of spot intensities, standard deviation regularization, flip dye cross-slide replicate analysis, and in-slide replicate analysis. ANOVA between time points was performed using Pearson correlation distance metric with p=0.02 and fold change of 1.5 was used as the arbitrary cutoff ratio. All slides were duplicated and fold change of all samples was determined with respect to the 0 min. sample. A total of 560 genes, representing ~2% of the genes in the Salmonella genome showed a significant difference in transcription between samples, and of these 276, representing ~1% of the genome had a fold change of ≥ 1.5. Genes related the DNA damage induced SOS response were prevalent among those unregulated at 30 and 60 min post treatment. These included genes of the rec, umu, din, uvr, and rtc operons, which are responsible for DNA damage repair and mutagenesis. Genes in the wca, yjb, and psp operons, which are associated with stress to the cell envelope and are responsible for exopolysaccharide production, showed a transient increase in transcription at 30 min post treatment. Flagellar synthesis genes in the fli and flg operons showed a transient decrease in transcription at 30 min post treatment. Patterns of transient gene expression, which include genes mainly involved in maintenance of components of the cell envelope, suggest damage to cell membranes. This agrees with previous reports of the cellular inactivation mechanism attributed to PEF, especially the temporary nature of the damage as implied by the transient up regulation of response and repair genes. Sustained increase in the transcription of SOS genes suggests that cells also experience significant DNA damage as a result of PEF processing. The up regulation of SOS genes may also explain the reports of a recovery period post PEF processing during which damaged cells are viable, but non-recoverable. It is unclear as to whether DNA damage is a direct result of the applied electric field, or if DNA damage occurs indirectly, due to influx of damaging materials into the cell during the time that membrane integrity is reduced. The function of many genes remains to be investigated and most are expected to be related to the DNA and envelope damage repair pathways. However, due to the large number of genes yet to be investigated in this study, it is likely that additional cellular targets of PEF will also be identified. As the full scope of cellular components affected by PEF is realized, methods for increasing the treatment’s effectiveness against undesirable bacteria in foods will be more readily determined.