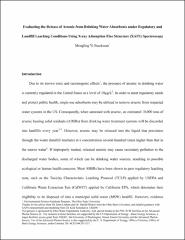 Due to its known toxic and carcinogenic effects, the presence of arsenic in drinking water is currently regulated in the United States at a level of 10μg/L. In order to meet regulatory needs and protect public health, single-use adsorbents are utilized to remove arsenic in most water systems in the US. Consequently, when saturated with arsenic, an estimated 10,000 tons of arsenic bearing solid residuals (ABSRs) from drinking water treatment systems will be discarded into landfills every year. However, arsenic may be concentrated and released into landfill leachate. If improperly treated, released arsenic may cause secondary pollution to the discharged water bodies, some of which can be drinking water reservoirs, resulting in possible ecological or human health concerns. Most ABSRs have been shown to pass regulatory leaching tests which determine their eligibility to be disposed of into a municipal landfill. However, existing evidence suggests that regulatory leaching tests failed to simulate the actual landfill conditions potentially favorable for arsenic release, such as elevated pH, reducing conditions, presence of competitive anions and complex natural organic matter (NOM) that could dissolve the minerals comprising the adsorbent. Therefore, it is crucial to investigate the mechanism of arsenic release, especially information of surface binding transformation that directly determines As leachability from the ABSRs under different leaching conditions. This research, therefore, represents one of the first studies utilizing both traditional chemical analysis and x-ray adsorption fine structure (XAFS) spectroscopy to evaluate As binding structures in ABSRs from long-term full-scale operations and associated binding strength differed from geographically diverse sources. Furthermore, this study also aims at providing direct binding transformation evidence to investigate leaching conditions favorable for As release. Our results show that the coexistence of weaker As binding structures is usually an indicator of less effective adsorption during drinking water treatment confounded by source water or treatment processes, such as less operation time, manganese coating and insufficient pH adjustment. Higher initial As loading would lead to larger As release in subsequent landfill disposal. Thus, drinking water facilities should consider the balance between the effective As treatment of the media and disposal cost in the future as the legislation tightens. Our results also presented no binding transformation after leaching tests at lower pH and transformation from stronger binding to weaker bindings as pH increases in the leaching condition. This could be utilized to directly support the idea that current leaching tests are not sufficient enough to simulate As release in landfill conditions with respect to elevated pH. TCLP was also shown to misrepresent the potential carbon-promoted iron dissolution or carbon competition with As on iron surface which would facilitate As release. The iron dissolution is found to be one of main contributors to As release in many recent studies.