Are New Crop Futures and Option Prices for Corn and Soybeans Biased? An Updated Appraisal 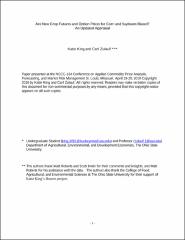 This study revisits the debate over whether a bias exists in new crop December corn and November soybeans futures and option prices. Some evidence of bias is found in December corn futures and December corn puts, but the evidence is substantially muted when transaction costs are taken into account. The study also examines if information contained in the widely-followed World Agriculture Supply and Demand Reports (WASDE) issued by the U.S. Department of Agriculture as well as the implied volatility from new crop corn and soybean options are incorporated efficiently into December corn and November soybean futures prices. Previous studies have examined the immediate incorporation of public information into futures prices. This study examines whether public information is incorporated efficiently from the perspective of the change in price from the first non-limit close after release of a WASDE report through the first contract delivery day. The May WASDE is the first calendar year release to include estimates for the forthcoming new crop year’s supply and demand. For both the December corn and November soybean regressions, the intercept, change in stocks-to-use ratio between the current and new crop year reported in the May WASDE, and option market implied volatility are significantly different than zero at the 95 percent confidence level. The current crop year’s stocks-to-use ratio is not statistically significant. These results held in general for both the May and June WASDE releases, although some sensitivity occurred when the May WASDE observation period was divided in half as well as by observation date. All variables were statistically insignificant at the July and August WASDE release. These results are not consistent with market efficiency until the July WASDE is released. However, because there are only 24 observations, these results fall more into the category of something that needs to be monitored in the future than as a direct confrontation to the theory of market efficiency.

The College of Food, Agriculture, and Environmental Sciences at The Ohio State University