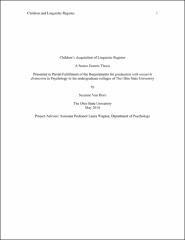 Linguistic registers are manners of speech that vary on measures of intonation, prosody, and vocabulary according to social or environmental cues. This study examined the development of the Infant-Directed, Casual, and Formal linguistic registers in children ages three- to five-years-old. This age range was selected because previous findings established that four-year-old children alter their speech when talking to infants (Shatz & Gelman 1973). This study was designed to look at how much children know about when and why speech changes based on speaker-addressee relationship. It also investigated whether register comprehension precedes production, as is the case with syntactic and semantic linguistic development (Huttenlocher 1974). The findings of this study indicate that children attune to social and environmental markers when processing language and that they are able to understand that register is an aspect of language that changes as a function of addressee. In this way children’s knowledge of linguistic register mirrors the adult understanding of bilingualism. Results also indicate that the age of register comprehension precedes that of production. Children ages three, four, and five successfully identified the correct usage of the Infant-Directed and Casual registers in a forced-choice task. Five-year-olds were significantly more accurate than three-year-olds. Performance on the Formal speech trials followed the same trend.