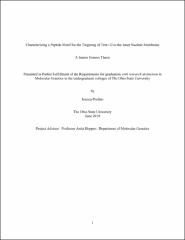 The nucleus of a cell is separated from the cytoplasm by the nuclear envelope, which consists of an inner and outer membrane. The inner nuclear membrane (INM) is home to many proteins. Genetic disorders referred to as "laminopathies", which include cardiac and skeletal myopathies, partial lipodystrophy, peripheral neuropathy, and severe premature aging, are caused by failure to correctly localize proteins to the inner nuclear membrane (INM). To study the process by which peripheral proteins arrive at and are maintained at the INM, I have employed a yeast model system using TRM1-II as a reporter. In yeast, Trm1-II, a tRNA methyltransferase, is peripherally associated with the INM. Previous studies determined that the Trm1 amino acid region 130-151 is necessary and sufficient for INM targeting (Lai et al., 2009). This is the first peptide motif discovered that has INM targeting activity. In order to determine which amino acids within the motif are important for INM targeting, I performed a random mutagenesis screen. The results suggest that structural features of this motif are responsible for the targeting of Trm1-II to the INM. Structural analysis of archeal Trm1 revealed that an α-helix is formed by amino acids 145-153. This α-helix is amphipathic (ie. one side of the helix is comprised of polar residues, while the other is comprised of nonpolar residues). Since amino acid changes that affect the amphipathic property of the α-helix resulted in the mislocalization of Trm1-II to the nucleoplasm, I proposed that the amphipathic property of the helix is important for the INM targeting activity of this motif. In order to test this, I am performing site-directed mutagenesis on speicific amino acids within the α-helix to generate mutations that result in the destruction of the amphipathic property of the α-helix. I will then assay the impact of these mutations upon the localization of Trm1-II. After refining the description of the important properties of this motif, future work will include searching other INM proteins for similar domains and testing whether mutations of these domains cause mislocalization of the proteins. This will help provide important information regarding the targeting mechanism of peripherally associated nuclear membrane proteins.