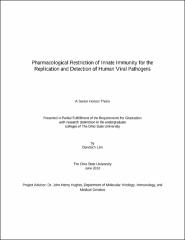 The focus of this study is to explore the immunosuppressive effect of the chemotherapy drug fludarabine and its application to viral cultivation. Fludarabine is mainly used in the treatment of chronic lymphocytic leukemia. It is a purine analog and inhibits DNA synthesis by interfering with ribonucleotide reductase and DNA polymerase. Some studies also show that fludarabine induces severe and prolonged immunosuppresion; such effects often increase the risk of opportunistic infections. This study explores whether fludarabine may enhance viral infection in vitro and aid the process of cultivating viruses that are previously uncultivable, such as Norovirus. The immediate goal was to develop a standardized procedure to treat cell lines with fludarabine, suppress innate immunity while retaining cell viability, and enhance viral infections. Carcinomic human alveolar basal epithelial cells (A549) were used to first test for cytotoxicity of fludarabine, and an optimal concentration to use that would still retain cell viability. After obtaining an optimum drug concentration, qualitative and quantitative methods were used to determine whether fludarabine treatment enhances viral infectivity; bovine enterovirus-1 (BEV-1), a single stranded RNA virus having positive polarity, was used for the test. Treatment exposure time, drug treatment method (pre-treatment or continuous exposure), and viral samples concentrations were all testable variables. The results indicated that fludarabine treated cells exhibited greater cytotoxicity than non-treated cells when infected with BEV-1; however, the difference in viral yields between drug treated and non-treated cells were inconclusive and required further experimentations. The study also discusses potential methods to improve the fludarabine treatment protocol.