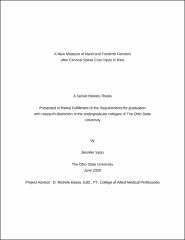 Approximately 12,000 new traumatic spinal cord injuries (SCI) occur per year in the US. Half of these injuries occur in the neck or cervical region, which impairs hand function. In animals with SCI, few reaching and grasping tests exist for bimanual manipulation or complex coordinated digit, forearm, and wrist movement. The objective of this experiment was to identify differences in movement, manipulation, and coordination of forelimb function after cervical SCI using elbow pasta. Adult Sprague-Dawley rats were randomly assigned into naive (n=3), mild (n=6), and severe (n=5) groups with a spinal contusion centered at C5. Injury severity was controlled using the Infinite Horizon (IH) impact device. The device is capable of producing graded magnitudes of injury (125 IH for mild, 175 IH for severe) by changing the force applied to the stabilized spinal column and exposed spinal cord. The experiment was set up to produce outcomes that are both sensitive to injury severity and recovery time tested at 7-70 d post SCI, 1 day/wk. In one session, rats were videotaped eating pasta in an enclosed area and paw and forelimb function was evaluated. Normal movements (digit and forelimb release and regrasp of the pasta) declined after mild SCI and severe SCI. Abnormal movements (fail to release or regrasp pasta and little digit movement) increased after mild SCI and severe SCI. This study provides evidence that using elbow pasta is a valid test to measure hand and forelimb function and can be used as a tool to evaluate SCI in rats. Thus, the elbow pasta test is a valid, sensitive tool which detects normal and abnormal bimanual function after SCI. It may offer better discrimination of efficacy for preclinical agents given its ability to measure both function and deficits.