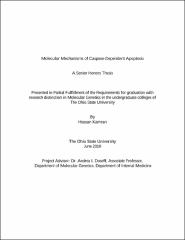 Apoptosis, or programmed cell death, plays an integral role in normal tissue development, killing cells infected with viruses or other pathogens, and in regulating the immune system. The caspases comprise a family of evolutionary conserved cysteine proteases central to apoptosis that function as mediators of cell death by cleaving specific proteins, eventually leading to the formation of apoptotic bodies, or dying cells. We have shown that caspase-3 is a phospho-protein and that the phosphorylation by PKCδ promotes its apoptotic activity. However, the sites targeted by PKCδ and the role of specific phosphorylation are unknown. The goal of the research is to map the PKCδ phosphorylation sites in caspase-3 by employing site directed mutagenesis in order to elucidate their biological roles in determining apoptotic ability and caspase-3 protein-protein associations. Using a combination of bioinformatics and mass spectrometry, we found seven potential phospho-sites. Based on their evolutionary conservation and their position in the 3-D structure, we plan to generate single and multi-phospho-mimicking point mutations of multiple serine and threonine sites. The caspase-3 mutant clones will be mutated to alanine, to mimic a lack of phosphorylation, and to aspartic acid, to mimic the phosphorylated status using site-directed mutagenesis. Mutant clones will be expressed in bacteria and affinity purified. The purified proteins will be used in an activity assay to determine the effect of the phosphorylation of the specific sites on the activity of caspase-3. The caspase-3 phospho-mutants will then be used in transient transfected breast cancer cells to evaluate their effect on chemotherapeutic-induced-apoptosis. These studies will contribute to a better knowledge on the basic mechanisms controlling caspase-3 apoptotic activity. Advisor: Dr. Andrea Doseff