Homeric Roles for Vergilian Contexts: Aeneas and Turnus in "Aeneid" 12 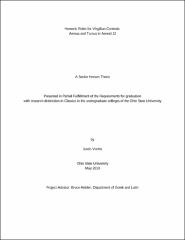 Since antiquity, scholars have recognized the close connection between the "Aeneid" and the Homeric poems, the "Iliad" and the "Odyssey." While this Vergilian-Homeric connection manifests itself in many ways, one of the most pervasive and least understood forms of this connection is the phenomenon of "Homeric roles." Throughout the "Aeneid," Vergil has his characters play the roles of various Homeric characters, from Achilles and Hector to Menelaus and Paris. While scholars have long recognized the existence of these Homeric roles, they have seldom provided explanations for what these roles mean and signify for Vergil's characters and the "Aeneid" itself. Thus, this paper aims to study the meaning and significance of several of Aeneas' and Turnus' Homeric roles in the "Aeneid."