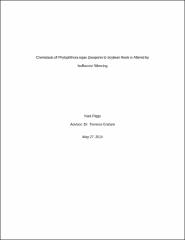 Soybean stem and root rot are caused by the pathogen Phytophthora sojae, costing soybean farmers millions of dollars in yield loss each year. P. sojae zoospores are the infecting bodies of the pathogen. Zoospores find the roots of host soybeans (Glycine max) in the soil because they are attracted to substances that are released by the roots. These chemical attractants, daidzein and genistein, are attractive to P. sojae in sub-nanomolar amounts. Silencing the production of daidzein and genistein could make roots less attractive to this pathogen and thus save soybean from the danger of stem and root rot. The hairy root generating organism Agrobacterium rhizogenes was used to initiate roots from Williams soybean cotyledons and to transform soybean with a RNAi construct to silence genes for an enzyme for isoflavone biosynthesis, isoflavone synthase (IFS). Root tips were harvested and placed on individual plates. A suspension of P. sojae zoospores was introduced on top of the roots, submersing the roots fully. Zoospore movements were monitored until the zoospores present had encysted. After encystment, the numbers of zoospores attached to the roots were recorded, noting the population of zoospores in each of five designated root sections. In those roots containing neither genistein nor daidzein due to IFS silencing, the zoospores were displaced from their normal point of attachment. When a high concentration of zoospores was added to the roots, control roots were more attractive than IFS-silenced roots. However, long periods of root exposure to the zoospore suspension equilibrate the differences between IFS and control root chemical attraction. The zoospore confusion achieved by silencing the IFS enzyme suggests that continued study of mechanisms underlying P. sojae zoospore chemotaxis could lead to improvements of disease resistance in soybean and related legumes.

This research has been supported by funds appropriated by the Ohio General Assembly to The Ohio State University, Ohio Agricultural Research and Development Center.