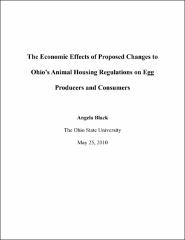 In 2008, Californians passed a constitutional ballot initiative which dictates housing regulations for several livestock species, including egg-laying hens, in that state. Animal welfare groups are now pursuing a similar ballot initiative in Ohio. Proposed regulations would ban the use of battery cages, which are currently used in 98% of Ohio's egg laying operations. The purpose of this study was to determine the economic effects the proposed measures would impose on egg producers and consumers in Ohio. Total transition costs for Ohio's egg industry were calculated using industry data from the USDA National Agricultural Statistics Service, the US Census of Agriculture, a poultry housing provider, and from three recent studies featuring primary data from the California egg sector. Conversion costs were compared to potential revenue gains associated with sales to the cage-free market. My results suggest that, if enacted, banning caged housing in Ohio will impose significant costs on the state's producers. Also, if all of Ohio's current production became cage-free, the cage-free egg market would become flooded, causing current retail price premiums to disappear. Ohio farmers would not be able to afford the production costs of cage-free eggs when receiving the lower price the market would offer and would therefore exit the market, most likely with only current cage-free producers remaining. It is also likely that these farmers' costs would increase due to the loss of economies of scale of large producers in the state who currently produce eggs using both methods.