Into the Heart of Darkness: Cosmopolitanism vs. Realism and the Democratic Republic of Congo 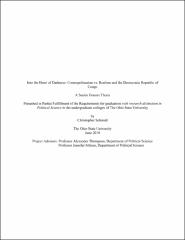