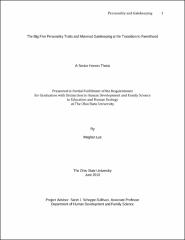 The transition to parenthood is an important time at which father-child relationships are established. One understudied contributor to the development of these relationships is maternal gatekeeping, which occurs when a mother discourages or encourages father involvement in childrearing. Research has shown that this type of behavior may affect the father's involvement. Knowing factors that contribute to maternal gatekeeping is important so parents can be aware of who is at risk and change their behavior if desired. The purpose of this study was to examine associations between maternal personality and maternal gatekeeping. The personality characteristics examined were the "Big Five": Neuroticism, Agreeableness, Openness, Extraversion, and Conscientiousness. The data used came from a longitudinal study of couples expecting their first child. Surveys administered during the third trimester of pregnancy assessed maternal personality, and surveys administered at 3 months postpartum assessed maternal gatekeeping beliefs and behaviors. Results were based on available data from 118 mothers. Significant correlations indicated that mothers high on Agreeableness had more realistic standards for housework and childcare, were less critical of fathers' parenting, and were less likely to endorse differentiated family roles. Highly extraverted mothers reported greater encouragement of fathers' parenting. In contrast, mothers high on Neuroticism held higher standards for childcare, placed greater value on their maternal identity, and showed more criticism towards their partners. Highly conscientious mothers desired more control over parental decision making. These results suggest that families in which mothers have particular personalities - especially characterized by Neuroticism - may be more at risk for discouraging gatekeeping patterns, and thus lower levels of father involvement in childrearing.