Gender differences in Japanese and English "s" versus "sh" 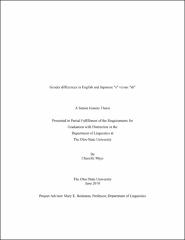 Men are, on average, larger than women, with longer vocal tracts and larger vocal cords. These physical differences give men lower pitched voices with deeper vowel sounds - think of men as bassoons and women as clarinets. However, there are many more differences between women's and men's speech, and not all of them can be explained by physiological differences such as these. It was revealed that some Mandarin Chinese-speaking women produce one of the "sh"-like fricatives significantly differently than men, positioning the tongue further toward the front of their mouths than expected. This altered tongue posture creates a smaller resonating cavity in front of the tongue, raising the frequency of the sound and thereby making the women sound smaller, "cuter", and overall non-male-like. Evidence that this is a social, and not merely physiological, effect is that we find something similar in Mandarin-speaking children as young as ages three or four. This means that the difference in pronunciation is acquired well before puberty and cannot be attributed to sexual dimorphism. The current study is an in-depth examination of fricatives as produced by child and adult speakers of Central Ohio English and of Tokyo Japanese. Its purpose is to explore whether there is a gender effect comparable to Mandarin's feminine accent present in the fricatives of these languages, and also at what age the effect is acquired. So far we know that there is indeed a gender effect that makes the frequencies of English-speaking women's productions of "s" very high. The increase in frequency makes the frequency gap between "s" and "sh" larger than the gap between the same two fricatives produced by men. Five-year-old girls seem to have already adopted this gendered speech behavior as well. If gender effects are indeed based solely on vocal tract size, mean frequencies should be higher overall in Japanese, whose speakers are smaller on average than English speakers, according to a theory by Heffernan in a 2004 paper.