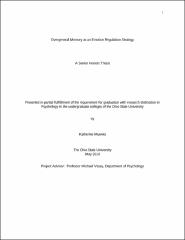 Studies have shown an association between depression and overgeneral memory (OGM), which is characterized by difficulty remembering specific details about one’s autobiographical memory. One hypothesis as to why reduced autobiographical memory specificity is related to depression is that it functions as an affect-regulation strategy and is a form of cognitive avoidance. This theory posits that OGM will be associated with maladaptive ways of regulating emotion, especially strategies related to avoidance and non-acceptance of negative emotions. In one small study (N=68) to date, associations were found between OGM and a small number of measures tapping experiential avoidance and thought suppression (Hermans et al., 2005). This study sought to replicate the findings of Hermans et al. (2005) in a larger sample using an expanded set of measures. The present study used 125 college students who, as subjects in part of a larger study, completed self-report measures. We found some significant correlations between number of non-specific responses on the Autobiographical Memory Test and measures of avoidance. We also found evidence for a mediational model in which avoidance mediates the relationship between OGM and depression. The results provide support for our hypothesis and enhance confidence in the findings of Hermans et al. (2005). This knowledge can potentially be applied to mindfulness-based treatments of depression that encourage acceptance and focus on diminishing tendencies toward avoidance.