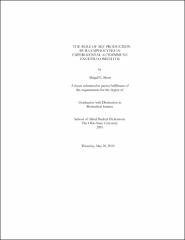 Multiple sclerosis (MS) is an autoimmune disease of the central nervous system (CNS) which is characterized by demyelination and axonal loss when autoreactive T lymphocytes gain access to the CNS. This leads to clinical symptoms of decreased motor and sensory functions. Macrophage migration inhibitory factor (MIF) has been shown to be critical for the progression of experimental autoimmune encephalomyelitis (EAE), an animal model for MS. When immunized with the encephalitogenic peptide of myelin oligodendrocyte glycoprotein (MOG) 35-55, mice deficient in the pro-inflammatory cytokine MIF are protected from EAE. . We show the clinical signs of EAE can be reversed by the use of small molecule inhibitors of MIF. Yet, MIF is constitutively expressed in all cell types and important in innate immune function, thus global inhibition of MIF could potentially cause adverse side effects. Thus, we investigate the cellular source of the biologically relevant MIF for EAE. Through a series of bone marrow chimera and adoptive transfer experiments, we concluded the necessary MIF is bone marrow derived. These experiments eliminated T lymphocytes as the source of the biologically relevant MIF. Recently, MIF has been linked to B lymphocyte maturation. Although the role of B lymphocytes in MS pathology remains unclear, the recent success of Rituximab, a monoclonal antibody against human B lymphocytes, argues for a strong role of B lymphocytes in MS. The purpose of the latter part of this study is to investigate the autocrine role of MIF production by B lymphocytes in EAE as a future specific therapeutic target. We observed significantly fewer mature B lymphocytes in the immune compartments of MIF deficient mice when compared to wild type counterparts. Yet, significantly more progenitor B lymphocytes were observed in an MIF deficient mice, leading to the hypothesis that MIF may be crucial for B lymphocyte survival. We also observed impaired proliferation of B lymphocytes in the bone marrow of a MIF knockout mouse. Next, we performed a series of transfer experiments where the only source of MIF is B lymphocytes to determine if this source alone could induce EAE; therefore providing a specific cell type to target MIF production in EAE. We observed protection of MIF deficient recipients regardless of MIF production by the B lymphocytes. Our data suggests that although MIF is important for B cell survival, it does not act in an autocrine manner.

This work received the first place award at the Denman Undergraduate Research Forum in the Biological Sciences category in both 2009 and 2010.