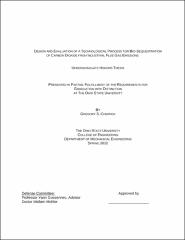 The main consequence of the industrial revolution is the improvement of quality of life. Another important consequence of this revolution is the dramatic impact of the industry on the environment. For centuries people believed that our environment is too large compare to our actions; that our pollutions will never cause significant change in our surroundings. Vast amounts of fossil fuels, formed over millions of years, were burned during the past two hundred years in order to generate energy. Fossil fuel combustion created large amounts of harmful greenhouse gasses. The most abundant of which is carbon dioxide (CO2). Scientific evidence demonstrates that currently our civilization is standing on the threshold of a human-caused irreversible environmental crisis. In order to prevent or to relieve the possible consequences of this crisis we must develop a technology that is capable of efficient removal of greenhouse gases for industrial emissions and from the atmosphere. One of the ways of natural CO2 sequestration is by means of photosynthesis. Photosynthesis is a process during which inorganic CO2, using the energy of sunlight, is converted into high energy organic compounds. This process is carried out by most green plants, algae and many kinds of bacteria, with unicellular alga among the most efficient CO2 consumers. Consequently, the purpose of this research was the analysis of industrial CO2 sequestrations by means of unicellular green algae. This document includes descriptions of a background on air pollution and on photosynthesis, of theoretical founding and of simulations. It describes the experiments, experimental setups and experimental results. It demonstrates the satellite discoveries during the experiments. The document presents the analysis of theoretical and experimental findings including the analysis of photo-bio-reactor efficiency, analysis of possible industrial implementation and suggestions of design solutions for selected elements and for the entire system for CO2 sequestration. As a result, Chlorella pyrenoidosa (CP) was determined as an algae species which is capable of successful industrial CO2 sequestration. Optimal environmental conditions were determined for this species. Here, the most important derivatives were the determination of the optimal nutrient composition, determination of desired level of agitation and the observation of the effects of CO2 concentration and of light intensity on algal growth. During the experiments the alternative ways of light delivery into the algal medium were examined. It was determined that CP can survive when the only light delivered to the algae was by means of an optical fiber. Further it was confirmed that the rate of CP growth is proportional to the amount of light delivered by the optical fibers. The rate of CO2 consumption by the algae was measured during the experiments. It was discovered that CP has two distinct CO2 consumption profiles (high 214.23 and low 8.55 kg of CO2 per day per cubic meter of algal medium). The satellite discoveries during the experiments included: bloom promoted inhibition – minimum sterile requirements, gravity induced separation onto fractions and cold induced sedimentation. The analysis of experimental results revealed that algal growth can be modeled by means of the logistic population growth formula. It was calculated that the sequestration of CO2 in a photo-bio-reactor can be about 300 times more efficient than the sequestration by a forest. Finally, it was proven that not only the sequestration of CO2 by means of green algae can reduce or even prevent the amount of industrial emissions but it can also result in profitable industry.