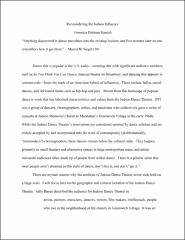 This paper investigates the relationship between the audience and contemporary dance that bears the clear influence of the Judson Dance Theater, a group of dancers and other artists who made dance and theatre work in New York in the early 1960s. Current dance practices still show the influence of many of the Judson artists' innovations. However, the ground-breaking dance practices of the Judson Dance Theater were relatively isolated within an elite group of artists in downtown New York, and this isolation has implications for the current status of contemporary dance in America. Whereas the aesthetic of ballet and modern dance was brought into the awareness of the American public by such means as Hollywood and Broadway musicals, non-theatrical venues such as the union halls where the Workers' Dance League performed, and the near-celebrity visibility of its practitioners such as Martha Graham, the Judson aesthetic had no such machinery for exposure. As such, that aesthetic as it is manifested in contemporary dance is largely unfamiliar and often bewildering to the public at large. Appreciation and enjoyment of Judson-inflected contemporary dance requires knowledge of the work of the Judson Dance Theater-its theoretical base and its art-historical context-and is therefore only available to a circle of dance "insiders."