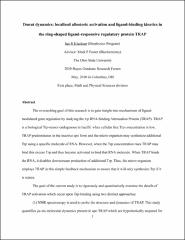 The overarching goal of this research is to gain insight into mechanisms of ligand-modulated gene regulation by studying the trp RNA-binding Attenuation Protein (TRAP). TRAP is a biological Trp-sensor endogenous in bacilli: when cellular free Trp concentration is low, TRAP predominates in the inactive apo form and the micro-organism may synthesize additional Trp using a specific molecule of RNA. However, when the Trp concentration rises TRAP may bind this excess Trp and thus become activated to bind that RNA molecule. When TRAP binds the RNA, it disables downstream production of additional Trp. Thus, the micro-organism employs TRAP in this simple feedback mechanism to ensure that it will only synthesize Trp if it is scarce. The goal of the current study is to rigorously and quantitatively examine the details of TRAP activation which occur upon Trp-binding using two distinct approaches: (1) NMR spectroscopy is used to probe the structure and dynamics of TRAP. This study quantifies μs-ms molecular dynamics present in apo TRAP which are hypothetically required for proper function. Upon Trp-binding, there are quantifiable changes in both the structure and dynamics of TRAP. Importantly, the protein appears to rigidify at the μs-ms timescale. (2) Stopped-flow fluorescence spectroscopy is used to investigate the time course of Trp binding upon rapid mixing with apo TRAP. These data reveal not one, but two kinetic steps interpreted as (a) Trp-binding which occurs slower than the diffusion limited rate, followed by (b) conformation exchange of TRAP between two distinct states. These data also indicate formation of bonds, increase in order and compression of TRAP structure upon binding. These investigations help Biologists to understand TRAP at a mechanistic level. They are also of broad interest towards rigorously quantifying the time-dependent behavior of any ligand-responsive protein (many of which are essential for life).