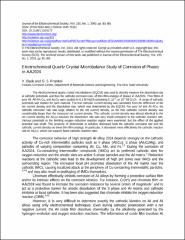 This work was supported by the United States Air Force Office of Scientific Research Grant no. F49620-96-1-0479 under the guidance of Dr. Paul Trulove.